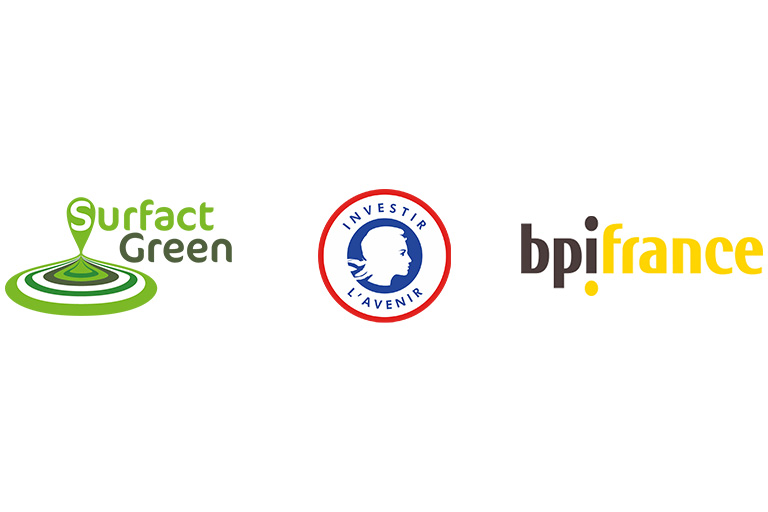 SurfactGreen, a company specialised in the production of bio-sourced surfactants, won the Innovation Contest organised by Bpifrance – as part of its Investment for the Future Programme. With its 1.1 million euro reward, SurfactGreen will be able to maintain its growth: hirings, industrialisation and sales partners are on the agenda for the next few months.

The Innovation Contest is a support grant financed by the Investment for the Future Programme. It is targeted to innovative projects undertaken by start-ups and SMEs, and aims to highlight projects offering strong prospects for the French economy. This year, over 450 applications were submitted, and 40 projects were selected under different categories: digital, health, security, cybersecurity and French-Fab – the latter being where SurfactGreen caught the jury’s attention.
The French start-up develops, formulates and markets green surfactants for various fields of application: bitumen emulsions, industrial detergents, agriculture and cosmetics.
Oil extraction is also a potential market for SurfactGreen. As such, the company recently won a call for projects amounting to 120 000 euros, enabling it to test its product offering developed specifically in line with the oil industry’s standards and in partnership with two companies in the sector.

Its technology stems from several years of research within the “Grande Ecole” ENSCR (Ecole Nationale Supérieure de Chimie de Rennes) pertaining to the development of green surfactants originating from bio-sourced raw materials such as sugar beet or algae. They are readily biodegradable and hardly toxic for humans and the environment.
The T2BIO project consists in synthesising and developing a new range of bio-sourced cationic and anionic surfactants. They are respectively derived from glycine betaine and algae extracts, to ensure biodegradability.

Xavier Roussel, CEO of SurfactGreen
“Taking part in the Innovation Contest required a great deal of work and investment for SurfactGreen over the last 6 months. We are extremely proud to have won this grant. It will allow us to better structure our development program, to boost SurfactGreen’s visibility and to diversify our sources of algae-based raw material”.

Within the anionic and cationic surfactant market, SurfactGreen is subject to regulatory standards, which, for instance, list, assess and control the chemical products that are manufactured in, imported into and sold on the European market. As such, REACH is a European Union regulation that guarantees the quality of chemical substances circulating within Europe. This regulation imposes high taxes for manufacturers if their volumes exceed one tonne (registration requirement) and do not meet certain requirements
SurfactGreen complies with the principles of green chemistry. The processes for transforming biomass into surfactants are all environmentally-friendly. They are solvent-free, biodegradable and cause very little toxicity for humans (hardly toxic at all compared to its competitors) and the environment. With results proving its products’ high performance and innovation levels, Reach granted SurfactGreen an exemption in this process – which is quite rare – for a period of 5 years.

Pierre-Yves Divet, President and Founder of SurfactGreen
“This exemption will enable us to save money and reinvest those savings into ongoing research and patent registrations. Our policy is highly committed from that point of view. The company has already registered 5 patents since its launch. SurfactGreen’s success will stem from its products technical and most importantly economic performance. It will come as a result of our ability to penetrate identified market segments with solutions that meet real demand”.

SurfactGreen works on research and development within its laboratory. It is already able to produce surfactants in volumes exceeding one kilogram. With a view to enhancing its processes on an industrial level, the start-up surrounded itself with partners such as SAS PIVERT based in Compiègne (France) – with whom industrial-scale production (up to tons) has already been approved. This change in scale regarding production capacity is a real asset for the start-up, as it now has more standing and can develop larger-scope sales contacts.

SurfactGreen’s team currently includes six employees, who are also shareholders. With a view to supporting its growth, the start-up is currently hiring. Two permanent positions have been opened – one for a business developer and the other for a laboratory technician.
SurfactGreen benefits from major support from its financial partners: Go Capital, FINOVAM Gestion and SATT Ouest Valorisation, which have been by its side from the very beginning. Beyond their financial investments, those partners are committed to the development of green chemistry.

SurfactGreen began in 2011 as a business unit of the ENSCR (Ecole Nationale Supérieure de Chimie de Rennes). In October 2016, it became a start-up, with several years of research already behind it. In January 2017, it successfully raised 1.2 million euros in funding. Its financial partners are: Go Capital, FINOVAM Gestion and SATT Ouest Valorisation, in addition to the 6 private shareholders who work for the start-up. SurfactGreen develops, formulates and commercialises readily biodegradable patented surfactants, offering very low toxicity levels for humans and the environment. Its products stem from agro-resources, such as sugar beet and algae. Its products can be used in various sectors, such as industrial work (bitumen emulsions, industrial detergents, oil extraction), agriculture and cosmetics.

SurfactGreen raises €1.2 m. to develop its surfactants from bioresources.

If you want the CosmoGreen MS1822 formula, fill in the form with your email address

If you want the CosmoGreen ES1822+ formula, fill in the form with your email address